ALERT: Most Commerce City facilities have reopened with restrictions, including modified hours. Most in-person services are available by appointment only. Visit c3gov.com/covid-19 for updates. Commerce City remains under the Safer at Home public health order.

Commerce City residents and businesses have direct access to Denver International Airport – the fifth-busiest airport in the country and 20th-busiest in the world.

A number of Regional Transportation District (RTD) bus routes serve the city and provide residents with public transit connections to rail service, the airport and other communities throughout metro Denver.

Visit RTD-Denver.com or call 303-299-6000 for more information on routes, schedules and fares.

Note: The route 62 bus that formerly serviced the southern part of the city (along E. 60th Ave. between Vasquez Boulevard and the Civic Center/Dick's Sporting Goods Park) was discontinued in January 2020. Grant funding for route 62 expired on Dec. 31, 2019 and the route was canceled due to low ridership. 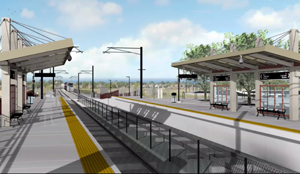 The city’s own commuter rail station is under construction at E. 72nd Avenue and Colorado Boulevard and will operate along RTD’s North Metro Rail Line, or N-Line. From this station, residents will be able to reach Denver Union Station in about 12 minutes or travel north to Eastlake-124th Station in Thornton in roughly 15 minutes. The N-Line is expected to begin service in September 2020.

Two major freight railroads also travel through the city: the Burlington Northern Santa Fe (BNSF) Railway and Union Pacific Railroad. Commerce City was the first in the state to take advantage of federal regulations that allowed for quiet zones to be implemented at railroad and roadway crossings. Since 2008, the city has installed four zones to eliminate traveling trains from blowing their horns in residential areas.

With two major railroad lines traversing the city, trains are often longer than the distance between roads and can block busy intersections. By reporting these issues directly to the railroad company, residents can alert them of frequent trouble spots and help resolve train-related traffic problems in the city.

The following major highways provide easy access to and from the city:

The Colorado Department of Transportation (CDOT) maintains interstates and Highway 85. The E-470 Highway Authority operates the toll road system. Commerce City maintains Highway 2 and local city streets and works with both agencies, as well as Adams County, as needed.

The city conducts regular traffic counts on major roads throughout the city. Most locations are counted on a biannual basis to identify trends and help the city engineer improve traffic flow.