ALERT: Commerce City is under the Safer at Home public health order. All City of Commerce City facilities and rec centers remain closed to the public until further notice. Visit c3gov.com/covid-19 for updates. 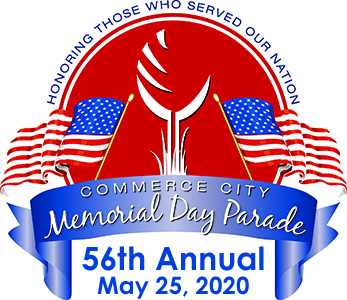 The City of Commerce City regrets to announce the cancellation of the 2020 Memorial Day Parade in the interest of public health due to the COVID-19 outbreak. The city’s 56th annual parade was set to take place on Monday, May 25, 2020.

Commerce City takes great pride in bringing thousands of people together in our community each year to honor those who have made the ultimate sacrifice for our country. Unfortunately, the need for social distancing and avoiding large gatherings in the time of coronavirus will prevent Colorado’s largest Memorial Day Parade from taking place this year.

To all parade participants and attendees, we hope you will join us to make next year’s event extra special when the Memorial Day Parade returns to Commerce City on May 31, 2021!

Commerce City hosts Colorado's largest Memorial Day Parade each year, bringing dozens of entries from around the region and thousands of spectators to the heart of Commerce City to honor those who have made the ultimate sacrifice in service to our nation.

The city wants to thank those who nominated a local veteran to serve as grand marshal of the 2020 parade. We encourage you to re-apply next year when we open up the nomination process for 2021 nominees.

The city welcomes nominations of military veterans young and old from any branch of the armed forces.

Nominees for grand marshal must:

The grand marshal nomination form will be available in early 2021.

Participate in the parade to help us honor service and sacrifice

Entries from around the region are invited to get creative and show their patriotic colors by participating in the Commerce City Memorial Day Parade. All types of groups can apply to participate in the parade for free. Parade entries are required to recognize and observe the parade's purpose of honoring veterans of the armed forces.

The parade entry form will be available in early 2021.

The 2019 parade was led by the Adams City High School Marine Corps JROTC, with Greg Nieto from Channel 2 and Fox 31 Denver serving as master of ceremonies.

Read more about the 2019 Parade Winners